Yeti… What can I say I have a thing for monsters.

Yeti, the monster formerly known as Bigfoot or the Abominable snowman. Of course this creature couldn’t exist, unless of course you are me. Then it does.

In attempting to track this down we went out into the field looking for eye witness accounts. Of course we couldn’t find any so instead we interviewed other imaginary creatures for comment…

“He was huge, very hairy with perfectly manicured nails.” Said one “Nessie” from the Scottish Highlands of Loch Ness. “He sometimes comes down to the lake, we chat a bit and sometimes he reads to me.”

Another Well regarded creature from the area of  Neptune had this to say. “Once while we were making new traffic signs in a field of corn we were interrupted by Mr. Yeti. He offered to help us if we would just scratch this small place on his back he was unable to reach. The work went three times as fast with his help and he told us a story about an Alien Invasion called ‘Mars Attacks’. Of course we explained to him there was no life on Mars but he just laughed and told us it was a fictional story.”

We next went to an old bone-yard for aircraft and asked the locals for some input on our friend the Yeti. We found them on the back end of an old B-17 gnawing on some wires. Unfortunately all of our recording equipment stopped working almost immediately. All we could piece together was a brief statement about how Drone aircraft were lame and how we should stop using sealed components in our military equipment.

Finally we went to see Chupa, he was less than helpful attacking three of the film crew before running off into the forest again. We still aren’t sure what it was we said or did to Incur the wrath of this usually friendly creature, however it was obvious that we did. we later sent an email asking for an explanation and some information on Mr. Yeti. The reply we received can only be partial reprinted. “Mr. Yeti why would you ask us about that , we thank you for your question you pitiful bags of .”

There you go a few thoughts from the people who know Mr. Yeti best… Its unfortunate we were unable to get more for you perhaps next time. We did of course ask Mr. Yeti’s publicist for a comment about our piece here and we received only this in reply. 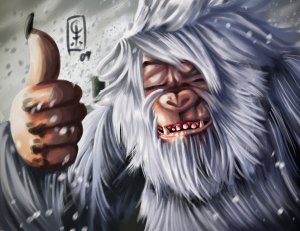 ← “X” Really I have to come up with an X post?
Zero Tolerance Policy’s… Now thats comedy! →

One Comment on “Yeti… What can I say I have a thing for monsters.”