I used to hear this quite often in the place I worked. “We have a Zero Tolerance policy for.” Some of the things were blatantly untrue though. If it hadn’t been so frustrating it would have been funny at the time. Fortunatly for me I know longer work there. Now I find it funny.

From Sexual Harassment to Theft. Indeed, there is zero, zip zilch… tolerance. Unless of course, it was an accident. You didn’t seriously mean to grab Mr. Reynolds’s ass… he backed into it, and you were just squeezing to check for concealed weapons. Let’s not even get into what he could be concealing in the back of his pants though… no seriously, lets just not go there at all.

Of course if you didn’t know so and so was in the room when you described her ass as two poodles fighting in a burlap sack.  That’s ok… but god help you if you say something in all innocence on a completely different subject, something like flower pollination and someone misunderstands having heard only part of the conversation… It’s all over then, Intent vs impact comes out and spikes the ball in the end zone, ending your time at that particular company. I also really enjoyed when the HR manager was the one making the comments in the first place. That’s ok though… in the same way the Spanish inquisition was ok. 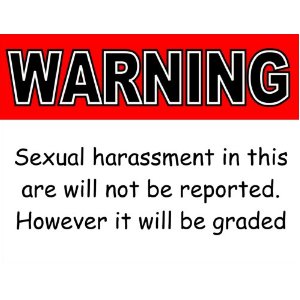 Theft was another big no no. Zero Tolerance for theft. Except if you took home $4,000 worth of stuff but returned it when I busted your goofy ass on it. Then it’s no problem you can just go home we wont be pressing charges. Oddly, it was never Loss Prevention saying that it was always Human Resources. LP wanted them executed.. HR was always worried about witness’s I suppose. Yet… if someone took a soda and forgot to pay for it BLAM!!! The wrath of god would come down from on high and smite the foul evil do’er to the ground. Little odd to me. Smiting for a bottle of water they drank while working their ass off… but the crackhead who took 4k he’s ok. Makes me laugh now.

What else is there…  Terrorism. It’s not workplace  related but… it bugs me, and I don’t find it funny.  Bin Laden, may he rot in hell was one of the “Freedom Fighters” we supported in 1987 against the Soviet Union… Terrorism is apparently only bad when directed against us. We paid him for what he did and in 1990, he decided to start paying us back. We saw what happened on 9/11. If we are going to have a zero-tolerance policy on terrorism, then quite a few nations that are considered “Rogue” “Evil” and “Of Concern” are going to need to get some new dictators. As it stands now so long as they give us information, we like them, never mind they help support the forces of terrorism… Playing both sides against the middle should fall under Zero Tolerance, I would think. 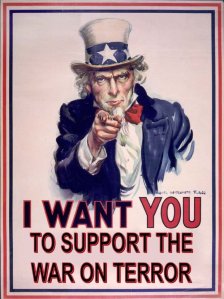 Seat Belt laws seem to have been made Zero Tolerance. Here in NY I see an ad campaign for “Click it, or Ticket.” Seems fine to me really. $50 bucks plus a surcharge of, well it varies but $85 seems pretty consistent. However… a DUI can get your license suspended or revoked by strike Three. Speeding like a jackass can have you taking a bus in one shot though. All I’m pointing out here is the disparity. I think seat belts are important, i think speeding is dangerous. I think people who get a DUI should instantly lose their license for a year. No if’s or buts. Done. Take the bus stupid heres a token for you. 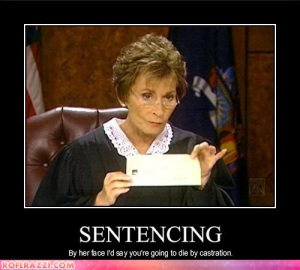 Bullying in school has become a big deal. Just not if you have been in trouble with the principle before. My Son gets bullied till he gets fed up and lashes out then he gets suspended and the bully gets… well nothing but a stern talking to. I freely acknowledge that if one kid hits another they should be suspended, my son deserved it. Here is the thing though, every single time I read a story about a school shooting it’s frequently because a kid has been bullied for so long and nothing was done. The answer at that point is to bring a gun to school and shoot the bullies and anyone else nearby. Thats sad, my son hit the kids teasing him, I’d rather him get the suspension then keep it bottled in and snap. No I don’t think he would but I’d put all the money in my pockets against all the money in yours that those kids parents never thought that their kid would either. Wow, bit of a tangent there… good thing it’s a blog.  Finally it’s ok to be a bully if you are a teacher apparently… you all know what I mean… “Do your homework or you will fail, I will call home and you will be in trouble.” I’m ok with that kind of bullying. 🙂 Just saying!

Zero Tolerance for anything should be exactly what it says it is. I know the “Human” factor makes it harder, but it shouldn’t be allowed to.

So thats it… I made it to “Z.” I think I will do some more planning for the next one… Letter X for certain. Thank you all for reading along as I wrote my little rants, jokes, and foolishness.

← Yeti… What can I say I have a thing for monsters.
The Apprentice and the Celestial… A Message Delivered. →