George Burns in “O, God!” is a very special kind of movie. I doubt very many people reading this have seen it. It was released in 1977. I really couldn’t tell you when I saw this but I can tell you who I was with. My Grandmother and I watched this on TV one day. I’m sure it wasn’t planned out or anything. She likely saw it in TV guide, maybe half way through my Grandfather came in and we all watched. I’m sure from their perspective it was more like, oh how nice George Burns is still working… Kind of like when we see  an actor from the 80’s we liked do a guest appearance. The trailer is just sooooo out of date. When the sequels came around I went to the theater to see them too.

I watched this over the weekend, and while some of it was pretty outdated I don’t think the message was at all. IN short God decides to choose one person to help spread the word about him… As you can guess, people have trouble believing. At one point during the end he talks about how no one had a problem believing in the devil a few years back… referencing “The Exorcist”. 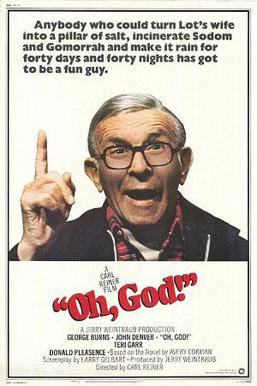 If you have never seen this give it a shot, I actually ended up starting to watch this on YouTube but switched over to renting it on Amazon after a few minutes… I kind of got sucked into it, I can’t really explain it.

Favorite Quotes – GOD – The last miracle I did was the 1969 Mets. Before that, I think you have to go back to the Red Sea.

– GOD – Tobacco was one of my big mistakes. Ostriches were a mistake. Silly looking things. Avocados, Made the pit too big.