We Were Soldiers – …Once and Young

I first saw this on a weekend. My wife had been on a bit of a kick every Sunday we would watch a movie with the kids, then later one we wanted to watch. A number of reasons eventually caused it to be called War Movie Sunday… including fighting with the kids to get them to do things so we could watch a movie. We Were Soldiers was for just us to  watch and I think started us using the in house War Movie Sunday reference.

The odd title for this blog is because after watching this I was curious and went and bought myself a copy of the book, “We Were Soldiers Once… and Young” – Lt. Gen. Harold G. Moore and Joseph L. Galloway. Mel Gibson played the then Lt. Colonel Hal Moore, and Barry Pepper played Joe Galloway. I have to say, when first watching this and then when I realized it happened… my attitude changed. It’s a great action packed film… but if for just a moment you can imagine, those people lived and died at Ia Drang. It hasn’t been spruced up or changed to make it more of a movie magic moment so the actors you see die, represent soldiers who did die. I’m not trying to convince you not to watch this, it is a fantastic film I just want you to know what it is you are watching. 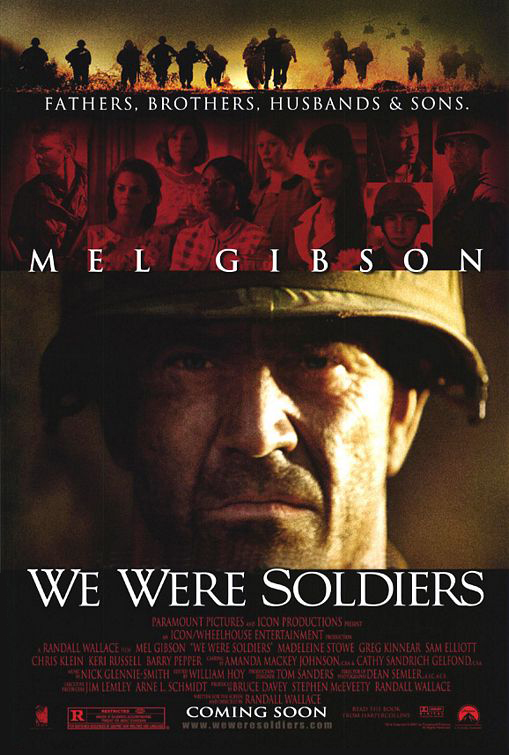 I’ll leave out my Quote this time since to be honest, I can’t specifically remember one, even after reading some of them to try and jog my memory. Usually the ones I put here are things I say 🙂 In this case… There is a running quote between Plumley and a Soldier involving it being a good morning… Watch the film and see.

← A to Z challenge for the letter “V”
Xfactor Movies – Films With… Something. →

3 Comments on “We Were Soldiers – …Once and Young”