But before I kill you…. Very bad dialogue for an Evil Overlord.

Posted on June 8, 2012 by Outside Perception

Saying that fateful phrase has been the undoing of more than one Evil Overlord.  Saying, “But before I kill you…” is a surefire way to make the fates smite you. 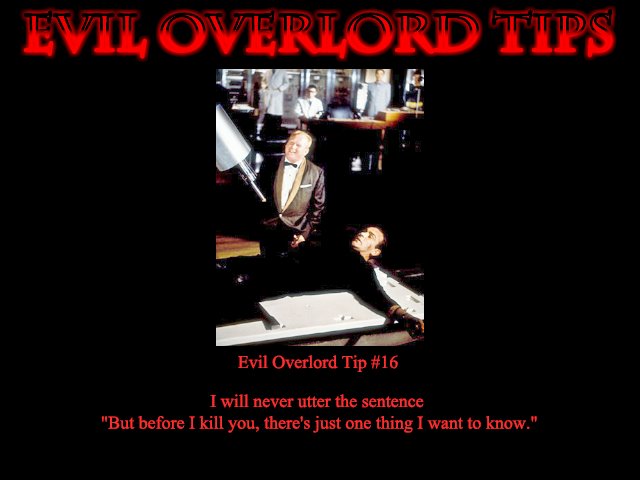 How many time do we have to see this happen. On average half the Bond villains have failed to kill Bond because of this. Ming the Merciless tried it so did hundreds of others, just to give away their plans and prove their own undoing. Even Captain hook has done it with Peter Pan, never ever tell your enemy what your plans are. Just kill them, verify it and be done with it. Move on to a new project and call it a day already. You know you are smarter, there is no need to prove it to the Hero, and while you’re at it remember if you are trying to prove something to the Hero, prove it by taking him out after all actions speak louder than words.

← Tick, Tock…. BOOM!
Advisors… you are paying them why not listen to them? →