This Evil Overlord Tip covers so many possibilities. It does indeed specify the Half Brother issues, at the same time let’s not overlook sisters and cousins. Think back to when Kings and Queens ruled most of the known world. Any threat to power should be eliminated, permanently. 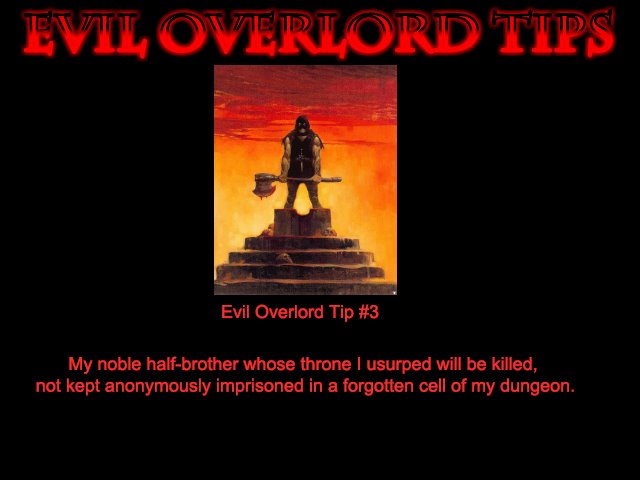 So many examples of why this is an important tip to follow. That Half brother could be a rallying point to the masses, it’s harder to rally when the people get to watch his head roll across the ground to stop under your Evil boot heel. That kind of thing leaves an impression. Machiavelli had some things to say on the subject and while he was never an overlord himself, he helped create quite a few of them since his teachings came to light.

Half siblings can be a nuisance, the man in the iron mask… well this was done skillfully at least, since historically speaking  no one is certain who was behind it, any of them, there were several incarnations. Still, death is the better method. Bad enough when someone tries to replace your most evilness with a life-like  robot or some form of Doppelganger. No need to give them a ready-made rally point.