I wonder… Don’t you?

I wonder about many things in life. I like Google. I once wondered where chickens came from. SO I looked it up, surprisingly chickens apparently came from… no one is sure lol. Somewhere in S. America was the best answer I could find. 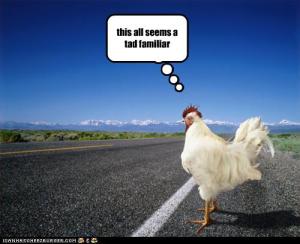 For many years I would ask people, “Why does 2+2=4?” Guess who had the answer? Google did. I would need to go to college for 12 years to explain it to you, but I get it now. Before you get all superior to me, try explaining to someone why 2+2=4 then come back here. Want to see an interesting discussion on this, here you go. Seems it isn’t always depending on the circumstances… Leave it to mathematicians to mess up my life just a bit more.

This one is kind of rater R+ I suppose, but I really wanted to learn how the word “Fuck” became so prevalent in our daily usage, at least here in the USA. I like Etymology. For those of you wonderful people who aren’t from my Country, leave some feedback let me know if its the same at your home. For those of you thinking it was an acronym, it isn’t they can’t precisely trace its origins but they try really hard to do so. The For Unlawful Carnal Knowledge F.U.C.K. is actually an urban myth. You can go look on Wikipedia and any other place you want to check, it’s interesting reading. Then there is this, I have a copy of this from a fax machine from back around 1990. Still makes me laugh. 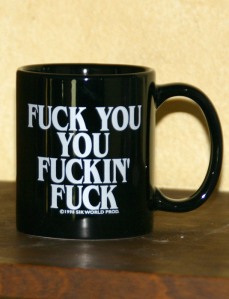 OK so maybe the cup is a bit much… but hey… Some of us want things like that.. Speaking of Santa. I looked him up too. You see we learn things as kids about how stuff works, what things mean and why things are the way they are. It doesn’t mean its true just means that’s the way we learned it. I don’t mean the Santa guy bring stuff down the chimney, I mean for real stuff. Like where did that whole things start. Oddly depending on the site you look it up on… Several places. SO Since someone may some day look it up and find my blog post. Here is the real answer. I AM SANTA CLAUS. (Spartacus Voice) 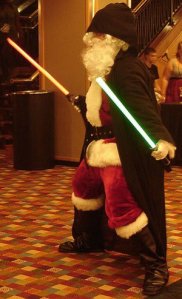 One final thing I wanted to know about… seems silly, then again so did all the other ones. I really wanted to know why that spot on your elbow was called a funny bone. It’s not funny when you hit it. In my head I knew it wasn’t a bone, but again we learned to call it that as kids so it stuck. Its a nerve, I knew that… Ninja Class FTW! Now you know too, no bone, sorry. I think its because you want to laugh, scream and cry all at the same time when you do manage to whack it. The nerve itself runs through the Humorous Bone, so it could have come from there. No one is really certain though, at least not that I ever found.