Posted on September 19, 2011 by Outside Perception


Hedgehogs have been on the front line of every battle since WWI when they would camouflage themselves as large metal stakes shaped like jacks to block tanks and provide shelter to those who fought alongside them.  hedgehog forces themselves never wanted any of the accolades that came with such self sacrificing behavior but preferred to remain apart in case some day a larger threat every presented itself.

Shown in the picture to the left is Corporal Haddy and Lt. Dartner.  Providing cover for the people storming the beach. Both survived this encounter and now their Grandchildren both fight in the Hedgehog Special forces division of the Elven League.  They were unavailable to comment on this piece apparently they are on “Training Maneuvers”.  We of course wish them luck and God’s speed.

As time has passed so has the mission of the Hedgehog Special Forces as they were utilized similarly during WWII as a support element plans were laid to have them take a more active role, if only in secret.  During the Korean war and later Vietnam they were used as more of infiltration force sneaking in to “Neutralize” certain forces from the threat board.  Since Hedgehogs have considerably longer lifespans then most other of the worlds creatures we have a picture here to the right of now Chief Haddy with one of his squad mates just as they were about to gas out an enemy bunker and then head in for some Intel and possible POW work.  We of course can’t say precisely when this occurred since it falls under the secrets act.

Through Research and Development the Hedehog forces ahve become much more adept at infiltration and elimination of enemy forces.  They no longer work for the Gov’t but are rather involved with the Elven League in “Problem Solving” As a privately funded group their tactics and weapons have become second to none.  These forces are now specialized for both woodland and urban assaults.  Working in places that the Winged Monkeys and Ninja Baboons would normally operate these Hedgehog forces now do more open work while still maintaining their specialized talents.  Amazing leaps in camouflage technology now allows them to blend in perfectly in any environment as shown below. 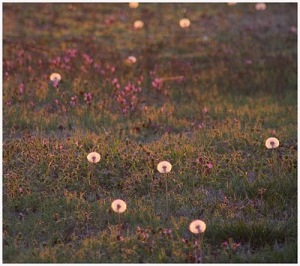 In addition to their camo abilities they have also gotten some upgraded gear in order to do quick assaults in any environment shown here is an Image of a Trooper riding on his trusty Steed. 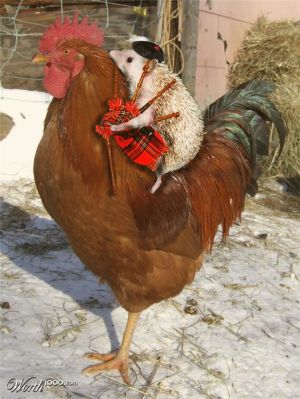 This was taken by one of our own troops of a member of the “Celtic National Hedgehog Brigade”.  While a Chicken may not seem like much  of a mount it is in fact rather genius for jungle warfare and quick maneuvers in the field.  The more high tech options for the hedgehog’s are of course classified however we did receive a photo of some prototype Rollerblades for quick urban assaults shown here to the

heel spikes and turbo boost among other things we have yet to discover. Hopefully we will see these in the filed soon if they aren’t already

In addition to these boots Hedghog forces are now armed with combat bows for silence and have been known to use Lemon wedge tips for maximum effect against almost al know opponents.  We were unable to get any photo’s of these weapons being eployed however we do have some nice images of the newer Lemon Grenades. See below. They come in “flavors”

Now of course there are times when the big guns have to be called in so some of the older more stable hedgehogs have been genetically altered in order to be used in a more offensive based role.  Using what they knew of camouflage techniques going back to WWI the Hedgehog R&D department decided to turn it around from a defensive hedgehog role for support and more offensive like the tanks they were originally used to slow down or stop during the first World War. Shown below is now General Dartner testing his new abilities in a controlled environment on the effectiveness of these new abilities against a lightly armored vehicle.  I’m sure you will agree it is impressive.

← Those red things irritate me…
Strange things we have around us, no one see’s. →